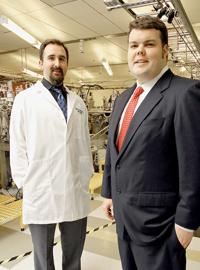 The biotechnology industry once again is pushing Congress to make small companies that are majority-owned by venture capital firms eligible for Small Business Innovation Research grants. Through the SBIR program, 11 federal agencies set aside 2.5% of their outside research budgets for small businesses. The National Institutes of Health is one of the largest awarders of SBIR contracts, investing more than $5 billion in 19,000 projects since the program began in 1982.

Biotech companies that are majority-owned by VC firms have not been able to tap this program since 2003. That’s when the Small Business Administration ruled that a company doesn’t qualify as a small business if venture capital firms own more than 50% of the company’s stock.

Some SBIR awardees think the VC rules need to be changed. Will Rosellini, CEO of MicroTransponder Inc. in Dallas, said the SBIR program has enabled his small medical device company to develop treatments for chronic pain and other neurological disorders. But he’s concerned that limits on VC investment will limit his company’s future.

“We may or may not eventually require VC funding on the order of over 50% ownership,” Rosellini said. “However, by not having that option, our overall probability of success is diminished.”

Local venture capitalists also think the rules need to be loosened to give their portfolio companies a shot at needed funding.

“Anytime you’re going after these grants, it’s free money,” says Roman Kikta, managing partner of Mobility Ventures in Addison. “When you’re able to get access to capital, regardless of the process it takes, it becomes valuable.”

The Biotechnology Industry Organization    and the National Venture Capital Association    have been lobbying Congress to overturn the SBA ruling since 2003. They contend the high cost of bringing drugs to the marketplace force biotech firms to obtain venture capital. These firms, they argue, shouldn’t be knocked out of SBIR awards.

The House last year passed SBIR reauthorization legislation that would make VC-owned small companies eligible for the grants, as long as no single VC firm owned more than 50% of the company.

This legislation failed to pass the Senate, however. Instead, the Senate Small Business and Entrepreneurship Committee pushed a compromise that would allow VC-owned firms to be awarded a limited share of SBIR grants: up to 18% at National Institutes of Health, or NIH, and up to 8% at other agencies. That bill, however, never made it to the Senate floor.

Since then, the SBIR program has been operating on temporary extensions, the latest of which runs out July 31.

The House Small Business Committee hopes to complete an SBIR reauthorization bill before that date. That committee and the House Science Committee recently held hearings on the issue. The Senate plans to hold a roundtable discussion on the SBIR program soon and is working on its own version of the bill.
SBA’s position may change

VC-owned firms may have a better shot of getting access to the SBIR program this year. Last year, the SBA opposed changing the eligibility requirements, contending that would weaken rules that ensure that large businesses don’t benefit from small-business programs.

This year, the SBA is led by a former venture capitalist, Karen Gordon Mills, who became administrator April 3. The agency is “looking at what’s on the table now” for the SBIR program but is “not going to chime in” until it completes its review, said Edsel Brown, assistant director of the SBA’s Office of Technology.

The recession also has raised the stakes for biotech firms.

“Numerous small biotechnology companies are being forced to shelve promising therapies as a result of the current economic crisis,” said Jim Greenwood, president and CEO of the Biotechnology Industry Organization, or BIO.

“The decline of the biotech industry jeopardizes not only America’s patient population, but also America’s competitive edge in the 21st-century global economy,” he said. “The importance of restoring eligibility to small biotechnology companies has never been more clear.”

BIO has an influential ally in NIH, which is concerned that applications for its SBIR awards have declined by 40% since 2004.

“This disconcerting trend appears to be the result of disincentives in the program that are either rendering worthy companies ineligible or driving them away for other reasons,” said JoAnne Goodnight, who coordinates the SBIR and Small Business Technology Transfer programs at NIH.
VCs can take minority stakes

The Small Business Technology Council and some current SBIR recipients oppose changing the program’s eligibility rules. Businesses owned by VCs or other large companies should target the 97.5% of federal research dollars that aren’t set aside for small businesses, they contend.

Jere Glover, the council’s executive director, said small businesses with venture capital backing can receive SBIR awards under current rules if VCs own a minority position in the company. Even companies majority-owned by a VC firm can receive SBIR awards if the VC itself — including all of its affiliates — has less than 500 employees.

“In other words, VCs can and do have access to the SBIR program,” Glover said. “In fact, the percentage of VC-backed companies in the SBIR program has been rising. The sole purpose of the VC restriction in the SBIR program is to prevent an SBIR company from becoming a subsidiary of a large business and still access funds that Congress intends for small businesses.”