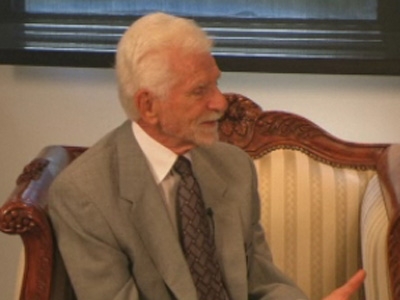 Martin (“Marty”) Cooper, the “Father of the Cellphone” talks about how the communicator on StarTrek inspired him to invent the modern day mobile phone and the early days of the wireless industry.

“People want to talk to other people – not a house, or an office, or a car. Given a choice, people will demand the freedom to communicate wherever they are, unfettered by the infamous copper wire. It is that freedom we sought to vividly demonstrate in 1973,” said Martin Cooper.

Marty also shares his ideas for new opportunities that will continue to reshape our wireless society.  “Technology has to be invisible. Transparent. Just simple”.

Martin Cooper is the former Motorola vice president and division manager who in the 1970s led the team that developed the handheld mobile phone (as distinct from the car phone). Cooper was also the CEO and founder of ArrayComm, a company that works on smart antenna technology and wireless networks, and was the corporate director of Research and Development for Motorola.

In 1973, when Motorola installed a base station to handle the first public demonstration of a phone call over the cellular network, the company was trying to persuade the Federal Communications Commission to allocate frequency space to private companies for use in the emerging technology of cellular communications. After some initial testing in Washington for the F.C.C., Cooper and Motorola took the cellular phone technology to New York to demonstrate it to reporters and the public. On April 3, 1973, standing on Sixth Avenue in New York City near the New York Hilton hotel, Cooper made a phone call from a prototype Dyna-Tac handheld cellular phone before going to a press conference upstairs in the hotel. The phone connected Cooper with the base station on the roof of the Burlington House (now the Alliance Capital Building) across the street from the hotel and into the AT&T land-line telephone system. As reporters and passers-by watched, he dialed the number and held the phone to his ear. That first call, placed to Dr. Joel S. Engel, head of research at Bell Labs, began a fundamental technology and communications market shift toward making phone calls to a person instead of to a place. This first phone weighed about 2.5 lb (1.1 kg). It was the product of Cooper’s vision for personal wireless handheld telephone communications, distinct from mobile car phones. Cooper has stated that watching Captain Kirk using his communicator on the television show Star Trek inspired him to develop the handheld mobile phone.   After demonstrating the prototype cell phone to reporters, Cooper allowed some of the reporters to make phone calls to anyone of their choosing to prove that the cell phone could function as a versatile part of the telephone network.