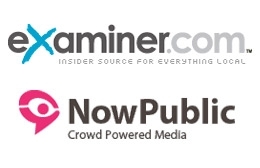 The buzz on the Internet is hitting close to home with Examiner.com’s announcement today of the acquisition of NowPublic, a pioneer in the new media space.

Examiner.com, which in July’s comScore report had more unique visitors than Huffington Post (not to mention NPR and the Drudge Report combined), continues to make waves across the net based on the strength of its Examiners, now more than 16,000 strong. Examiner.com and NowPublic will make strong team members in the quest to provide informative content in an entertaining and timely manner. Merges Examiner.com’s Breadth of Content with NowPublic’s Technology to Deliver Unparalleled Hyperlocal Offering

DENVER, Colo., Sept. 2, 2009 – Examiner.com , the insider source for everything local, has acquired Vancouver-based NowPublic, a pioneer in user-generated content and the largest participatory news network in the world.

Examiner.com, whose audience has grown more than 200 percent since the beginning of the year and now has more than 15,000 Examiners (Examiner.com’s expert writers) in 109 U.S. cities, is the industry leader in creating local content, and will leverage NowPublic’s innovative search and publishing technology to solidify its leadership position in providing local news and information, delivering on the long-held promise of relevant, robust hyperlocal content to both consumers and advertisers.

“Every day we hear discussions about whether hyperlocal content will ever be scalable, sustainable or profitable as a business entity,” said Rick Blair, CEO of Examiner.com. “Examiner.com is rapidly becoming the solution to the hyperlocal puzzle. In the last year we have created the depth of content consumers and advertisers expect. With the acquisition of NowPublic, we have the technology to further engage our community of over 17 million unique visitors per month and distribute our stories in new and innovative ways.”

Among the technologies Examiner.com will adopt from NowPublic are its Emmy nominated real-time mechanism for scanning online conversations, world-class open source technology Drupal, and an enhanced publishing platform for Examiner.com contributors, who are projected to grow to over 30,000 by the end of the year.

“The NowPublic focus has always been on providing individuals, whether they are amateurs or professional journalists, the tools they need to quickly and easily contribute their perspectives on the issues of the day and the topics that interest them and their community,” said Leonard Brody, CEO and co-founder of NowPublic. “By combining our tools and audience with Examiner.com’s established, vetted, local content-generators, we are enabling Examiner.com, which has already seen incredible success, to further succeed in providing a site that attracts experts as contributors, passionate readers and the advertisers that want to reach them.”

In addition to the integration of NowPublic’s technology, Examiner.com will also actively recruit new Examiners from NowPublic, focusing specifically on NowPublic’s “professional amateur” contributors as well as its bevy of international writers, including its strong Canadian presence. NowPublic will also serve as a testing ground for new Examiner.com programs and ideas.

Examiner.com and NowPublic will operate independently, retaining their unique offerings and brands.

About Examiner.com
Launched in April 2008, Examiner.com serves 109 markets across the country and is the insider source for everything local. Examiner.com’s content is contributed by Examiners; passionate, informed, and knowledgeable local influencers. Examiner.com is a division of the Clarity Digital Group, LLC, wholly owned by The Anschutz Company, a Denver-based investment company with a broad array of assets in print and digital media; live sports and entertainment; hospitality; film production and exhibition; wind energy development and transmission; as well as ranching and oil/gas exploration. For more information, visit Examiner.com.

About NowPublic
NowPublic is a crowd-sourced, participatory news network that mobilizes an army of reporters to cover the events that define our world. In its short history, the company has become the largest news organization of its kind with contributing reporters in more than 6000 cities and 160 countries. The Guardian has named NowPublic.com one of the top five most useful news sites on the Web and TIME Magazine named it one of the Top 50 Websites for 2007. NowPublic Technologies Inc. is a Vancouver-based company. The company owns and operates NowPublic, which showcases its platform for citizen journalism.