Building The First Cellphones… One Part Of A Larger Life 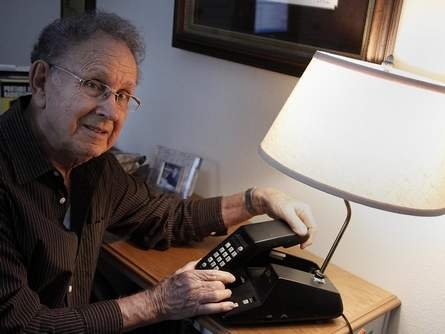 Building The First Cellphones… One Part Of A Larger Life

EAST MANATEE, FL – Serial No. 001 of the first line of cell phones approved for use in the United States is on display in the Smithsonian Institution. No one knows what happened to phone 002.

But cell phone 003 has a place of pride in the study of Bradenton resident Mal Gurian, a memento of his leadership of the company that built it.

In the early 1980s, Gurian ran Oki Telecom, a division of a Japanese company that was in a race with Motorola to create cellular phones.

It was an era before miniaturization and digital communication. Oki’s handset alone weighed several pounds and the phone, intended for use in a car, required an 82-pound transmitter-receiver that went in the trunk.

“We knew we would have a portable phone,” Gurian said. “We never knew they would do all the things they do today.”

Oki won the race in 1983, which led the company to a huge contract to manufacture cellular phones for all seven Bell companies. Gurian was nominated to the Wireless Hall of Fame in 2003 for his contribution to the development of cellular phones.

When Gurian eventually left Oki, the company threw a party and presented him with phone 003, which they had converted into a lamp.

“It was the most exciting time of my life,” said Gurian, 85. “Here I was right in the middle of something and look what it became today.”

That small slice of history is only one highlight of a remarkable tale that is Gurian’s life story.

Gurian took photographs of Frank Sinatra and Duke Ellington for a magazine while still in high school, flew bombing missions in Japan during World War II and hung out of small airplanes to take construction photographs of the New Jersey Turnpike and the Verrazano-Narrows Bridge.

Those dizzying photos of skyscraper construction workers? Many times, Gurian was the one behind the lens, striding across 14-inch wide girders with nothing but fresh air between him and the ground.

Gurian was born in the Bronx in 1926. His father worked as a crane operator.

But Gurian’s passion was photography. While in high school, he freelanced for the New York Daily Mirror and DownBeat magazine, spending his evenings in night clubs and theaters capturing images of the likes of Benny Goodman and Cab Calloway.

After the U.S. entered World War II, Gurian enlisted in the Marines a few days after his 17th birthday.

His unit, the 1st Air Wing, soon put his photography skills to good use. Gurian flew in small fighter planes that dodged anti-aircraft fire while he photographed Japanese villages and bases.

As soon as Gurian landed, he would develop the photographs and then fly on B-24 bombing raids targeting the sites he had just photographed. He was awarded an Air Medal for his service.

After the war, Gurian turned that experience into a career, taking aerial photographs of major construction projects so companies could monitor progress.

“I would unhook the seat belt and hang out the plane to get the best photo I could,” he said.

The job also meant climbing unfinished bridge towers and skyscrapers. Gurian remembers being 60 stories up on the World Trade Center.

“The height never bothered me,” he said of his younger years. “Now, I get on a ladder and I’m careful.”

He launched his own CB radio company, selling sets to construction and trucking companies, and eventually moved into FM radio.

That proved to be his introduction into the telecommunications field, where he pushed the technology forward.

Dave Rowan, a business partner of Gurian’s who has known him for almost 30 years, said Gurian was always energetic, and could still wear out a 25-year-old.

“Some people are blessed with energy and clear thought passages — that was Mal,” Rowan said. “He could have six things going on at once, schedule another three or four and then put together a plan to make them all work.”

Gurian worked for several more companies before moving to Florida 14 years ago with his wife, Gloria. The couple will celebrate their 65th wedding anniversary this year.

He intended to retire and play golf. But he quickly became bored and, he said, his game just wasn’t very good.

So he formed Mal Gurian Associates, and carved out another career making introductions and advising companies that want to enter the U.S. telecommunications market.

Now, 20 years after most people retire, the 85-year-old shows few signs of slowing down.

His hair may have grayed but his eyes are still bright and alert, his mind still sharp. He walks his dog 2 miles every day and rides his bike for 7.

He still drives performance cars too quickly for his wife’s liking and is on the board of the Radio Club of America.

“The word scares me,” Gurian said. “Meeting younger people makes me feel younger. I jokingly say, ‘I have to move fast so the devil can’t catch me.'”

Source of the Article: http://www.heraldtribune.com